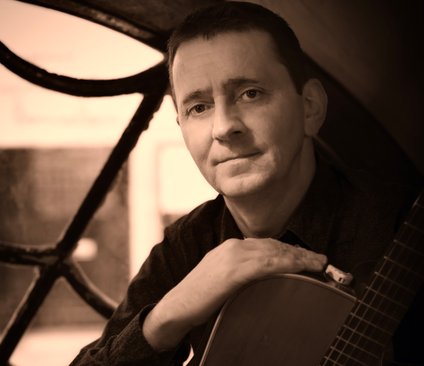 Pat Kelly - Irish born singer, songwriter & guitarist began his career early, writing his first song at the age of 11, picking up his first guitar the same year, with early influences from artists like Springsteen, Dylan and Dan Fogelberg. Growing up in Waterford city, most nights as a teenager were spent listening to WLR local radio, learning new chords on the guitar and of course writing those really odd lyrics that only a teenager can.

Pat sang and played guitar and bass in several local bands in Ireland for a few years before he decided it was time to spread his wings a little further. He moved to Konstanz, Germany in 1993 and began playing the Irish bar circut in Germany, Switzerland and Austria. He would meet many fellow musicians on the road during this period. "They have all been inspirational in one way or another, the learning curve with these guys has been more like a roller coaster ride!".

In 1997 he recorded his first album "Now And Then" in Germany, consisting of 10 self-penned songs. Pat himself describes the album as almost an "open book" on his life up to that point. Songs like "Secrets" - his personal favourite on the album - just tell it like it is. The album was well received by fans in Germany. A low key acoustic album - it utilizes the essence of what makes the Pat Kelly sound - just voice and guitar. In June 2001, Pat began a four month stint as resident musician on the Greek island of Kos. During this summer season at "Club Hamam", Pat met up with other musicians, music agents and bar/pub owners from Holland to Denmark, and there began a new and fruitful chapter in Pat's music career - a move to The Netherlands.

2009 both of Pat's 2 studio albums go on worldwide digital release. A brand new album "Alice Is Not In Wonderland" featuring 10 new songs recorded in New York and Copenhagen, was released worldwide in February 2011. The album features a host of musical friends who joined Pat on several songs, including Julie Corbalis (USA), Thomas Rosenberg (DK), Noel Shannon (IRL) and Stefanie Fuerst (DE) among others.

After a couple of months break from travelling and performing, Pat went back on the road in October 2015 in Holland, Belgium and Denmark.

January 2016 brought a brand new single, the first release since 2011. "No Illusions" is a tribute to Roy Orbison and Jeff Lynne (ELO), two of Kelly's very early influences. In 2018, Pat wrote, produced and arranged a power ballad for Irish singer Bianca Kinane, released in March 2019 titled "Until The Edge of Time".

For further information, bookings and all other queries: